Be the best you can be

Class Assembly dates are on the school calendar, please check dates as they are all over the next few weeks.

This has been an exciting term for sporting fixtures and we at North Borough have achieved some great results!!

A team of year 6 children competed in the Primary Schools Basketball competition at Maplesden Noakes School. We were up against some talented players from a variety of schools in our league meaning that we narrowly missed out on going through to compete for the cup competition. However, missing out on the cup competition meant that we were now competing for the Plate competition.

The plate competition saw an invigorated and even more determined North Borough side, we knew that we had missed out marginally on the cup but the plate was still available to win! Every game we played confidence, determination and a lot of skill, with every game being won by a large margin!

I am extremely proud of all of the children that represented North Borough and even more pleased to inform you that we came away as winners of the plate competition!!

Our very shiny, new plate is now on show at the front office 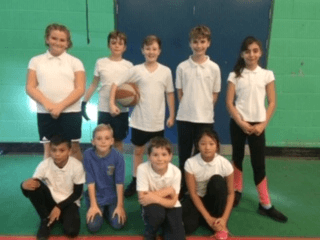 North Borough has also been busy with both their girls and boys football teams representing the school at local tournaments.

The girls’ year 5 and 6 team had great success at the Maidstone United 7-a-side tournament last week which was played in freezing conditions at The Gallagher Stadium.

We once again had a difficult group but this did not deter the girls who played with passion and confidence in every match. Our attitude and great skill helped us to progress through the tournament to the semi-finals where we lost against East Farleigh. 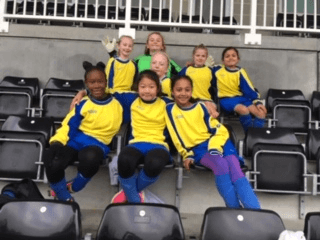 The Girls football team were lucky enough to play in another   7-a-side Football tournament at Greenfields Primary School. A slightly different team of team if girls were taken to this tournament, this due to the growing popularity of our club, our desire to provide opportunities for all and the sport for girls, which is excellent news!

At the tournament we had drawn some established and challenging teams but our fighting spirit and determination saw us playing our hearts out in every game, we managed to draw a game, lose a game and win two games in our league which was excellent!! We were very excited to find out that our results had earned us a quarter final position!!

The draw for the quarter final had drawn us against a very competitive and talented West Borough side! The North Borough girls were determined and played an amazing and very evenly matched game against them. The score at the final whistle being 0-0!! We then had to go into a sudden death situation, meaning that we had to play for another 7 minutes and the first goal would determine the winners- nail biting stuff!! After an incredibly tense 7 minutes of excellent football we then found ourselves still with a 0-0 score line, there was only one way left to decide ……………PENALTIES!!!!

We found ourselves in penalty shoot out!!

Three extremely brave North Borough girls stepped up to take one for the team and of course our very brave goal keeper!

The score line remained close but sadly that was where our very exciting journey came to an end!

The girls were amazing throughout the tournament, they played with commitment, positivity and determination and were once again a credit to North Borough. 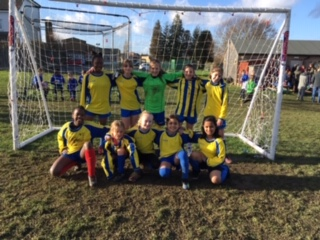 The boys year 5 and 6 team played at the Greenfields 7-a-side Football Tournament this week.

We had some difficult teams in our group but our boys played passionately and determinedly in every game and gave performances to be proud of. After completing our group matches which had all been very close games, we found ourselves having to wait to see if we have qualified into the quarter finals. It was a tense wait and we were hopeful but once the results were finalised we were extremely disappointed to find out that we missed out on a quarter final place by 1.8th of a point!!!!!!!

However, the disappointment did not keep our boys down for long as we then went on to beat Greenfields in a friendly game 3-0!!

We were lucky enough to enter our first ever sports hall athletics this week. We took a team of twenty four year 5 & 6 children to compete at Maplesden Noakes School against 11 other local primary schools.

The children competed in a variety of track and field events, all trying their very best to win.

We had a great time at the competition and enjoyed ourselves.

We achieved 9th position overall, which we are very pleased with for our first competition of this kind.

I have been extremely proud of all of the children who have represented North Borough in these competitions. Their excellent sportsmanship, attitude and determination has been outstanding! 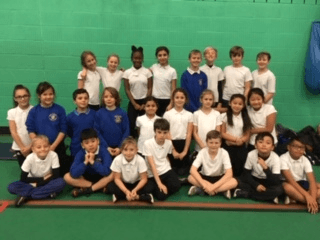 All in all a very exciting term, full of excitement and sporting prowess!!

Thank you to all parents who have helped with transporting our sporting stars, we wouldn't be able to enter these competitions without your support!